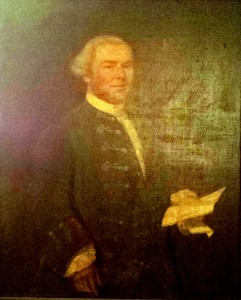 Patrick Coutts is sometimes described as the “moving spirit” of Kilwinning Crosse.  Thought to be a wealthy Scottish merchant, his character is known to be violently independent and well trusted within the community.  His origins as a business man began in Port Royal and later found him in Richmond where he owned large portions of land in the city center and outlying areas on the James area.  There, he operated a ferry on land he owned known as “the Fishery and the Ferry” likely just below the present day Mayo Bridge.

Speaking to his sense of independence, an account from a Mr. Thomas Adams (William and Mary Quarterly, Vol II, p.98) recollects the following anecdote:

Mr. Patrick Coutts was a rich Scotchman, who lived at Richmond and owned a ferry.  A story illustrative of his independent character is preserved.  He was a great friend of William Byrd, of Westover, some twenty miles further down.  Both fell sick about the same time.  Finding that he could not live long, William Byrd sent a courrier – post hast to Coutts to tell him to wait for him.  Coutts who was also dying, had strength enough to say: “Tell William Byrd that when Patrick Coutts makes up his mind to die, he waits for no man.”

Of interest to the lodge is that Brother Coutts presided over the lodge for a total of 8 stated or emergent communications.  The dates of these communications begin at April 12, 1754 and conclude November 10, 1754.  These dates pre-date the signing of the 1755 charter from the Grand Lodge of Scotland.

Today, an original portrait of Patrick Coutts is available for viewing in the present-day Kilwinning Crosse Lodge.