Original jewels and apron presented to Kilwinning Port Royal Crosse at it’s date of chartering from the Grand Lodge of Scotland.

At or shortly after the time of it’s charter, Kilwinning Port Royal Crosse Lodge was gifted a set of finely crafted officer’s jewels for use in their regular meetings and degree work.  These jewels remained in the lodge at Port Royal until the later years of the Civil War.

In June 1864, as a Union army marched from Fredericksburg to the deep water port in Port Royal, a Union soldier broke into the closed lodge building and stole the officer’s jewels.  This shameful deed was luckily witnessed by a member of a band company who happened to also be a member of Paul Revere Lodge from Brocton, Massachusetts.  This brother pleaded with his fellow soldier to give him the jewels due to their antiquity and significance to the craft, but the solider refused.  After some argument, the brother and soldier were able to agree on a price for the jewels.  Due to the pressing economic times that surrounding the war, this price was more than the brother was able to afford himself, so he took a collection from his band company and was finally able to secure the jewels.  Upon receiving the priceless relics, the brother had them sent to his mother lodge in Massachusetts where they resided for the duration of the war.

In 1887, contemplating on his life and his memories of what he called “the Cruel War”, the brother penned a letter on Christmas Day and with it included a pen-sketching of his home lodge and a small tin box containing the jewels belonging to Kilwinning Port Royal Crosse, now renamed Kilwinning Crosse Lodge.

Upon receiving these jewels, the brethren of Kilwinning Crosse immediately assembled a committee to aggregate a written history of the lodge and include it in a letter addressed to Brother Emory Packard, the brother who saved the jewels from the hands of a thief and may have preserved them from the ravages of time.  Kilwinning Crosse still proudly protects these fixtures within it’s walls. 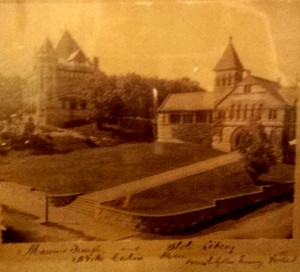 Picture of Paul Revere Lodge in Brocton, Massachusetts sent to the brethren of Kilwinning Crosse Lodge upon return of their ancestral jewels.